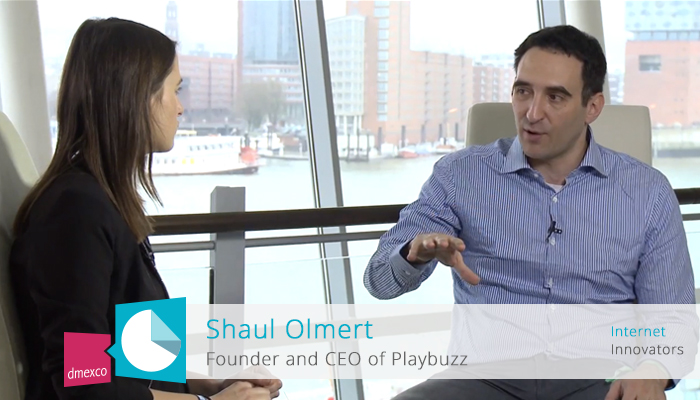 The interview with Shaul Olmert at the Online Marketing Rockstars Conference

In a worldwide comparison of aspiring startup regions Israels capital Tel Aviv comes right behind the Silicon Valley. A lot of great innovative and interesting start-ups do start here, for example “playbuzz” whose founder was interviewed by internetinnovators.com.

For young professionals in the German start-up business Berlin is definitely the place to be. However, in a worldwide comparison of the most influential start-up regions Berlin comes only 15th in the ranking. First place is – of course – the Silicon Valley. Second: Israels capital Tel Aviv. Although Israel has only eight million inhabitants they currently have about 4000 start-ups in their country!

One reason for this startup boom is the mentality of the israeli. They are more eager to try out new things, fight for their ideas and are less afraid of failure. They have great entrepreneurial spirit. Additionally, the military plays an important role as well. During their service young people work with a lot of new inventions in tech and cyber security, they receive ambitious training and learn to manage projects in a high pressure work environment. A lot of future start-up teams form up during their military services, for example 6Scan, a company that provides a cloud-based printer to their customers. Another reason for the startup boom is the disposable venture capital which is worth a billion dollars per year, five times greater than in Germany.

It is not surprising that investors are willing to fund israeli start-ups considering some of the high profile buyouts in recent years.  For instance: In 2013 Apple bought PrimeSense, the company that developed the Kinect-System for Xbox 360 for 360 million dollars. In the same year Google bought the navigation app Waze for over a billion US-Dollars. Amazon just recently bought Annapurna Labs for an unknown price. It is clear that  global players are more than interested in israeli start-ups.

And there are more to come: The travel-app Moovit for instance makes it easier to navigate public transport. They already launched their service in Germany, at first only for the cities Berlin Heidelberg and Ulm. Mypermissions is another handy app which gives you an overview on all the pagelong terms and conditions you – be honest – NEVER really read. Another Interesting, but slightly a creepy, app is Getyou. You can sign up with you facebook profile, answer a few questions about yourself and start: Its basically about trying to assess other people’s character by looking at their profile pic on facebook and being assessed by them. In this way you can find out what for a first impressions other people have of you via social media and how good your intuition is.

Another highly popular startup is playbuzz, a platform for mostly user-generated quizzes. It was founded in 2013 and skyrocketed in 2014. In January 2015 no other platform got more facebook-shares than playbuzz: Over 10 million in total. At the beginning playbuzz looked a lot like the similar platform buzzfeed, something playbuzz fixed recently.Its founder is the son of the former israeli prime minister Ehud Olmert. We were able to talk with him about the huge success of his start-up and what comes next for playbuzz.