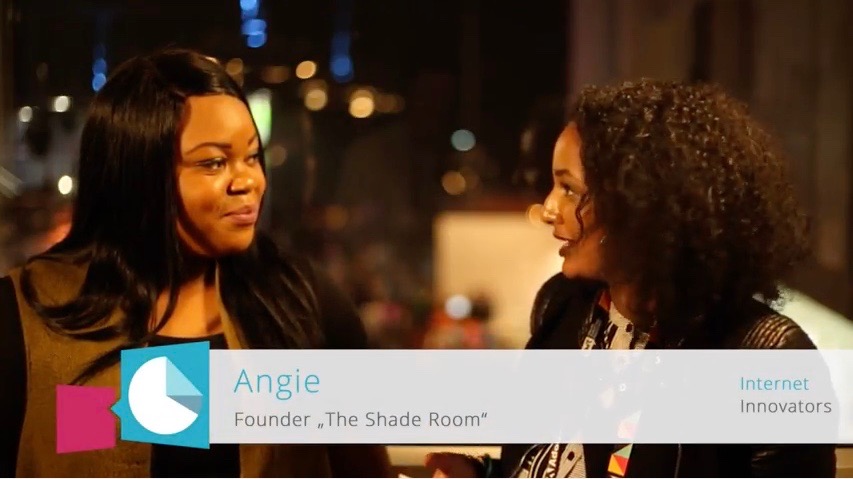 At the Online Marketing Rockstars 2016 the 25-year-old founder Angie Nwandu talked about her mega-popular celebrity news site, called the Shade Room. In our exclusive talk she proves how to monetize her deep understanding of social media and the online culture of an entire generation.

How The Shade Room started

Angie Nwandu, who made it to Forbes’ 30 under 30 in Media list this year, started The Shade Room in March 2014 after she lost her job as an accountance. She looked for a chance to professionalize her most appreciated activity – writing.

She set two targets she wanted to attain by the end of the year: Having 10.000 followers on Instagram and 5.000 subsribers on the website.“But after two weeks I reached the goals and that was the point where I knew that it will be something big – something different.“

Now she has a full-time staff of four who publish content 24 hours a day. The Shade Room launched on Instagram before moving to Facebook, Twitter and recently the web. The Shade Room talks about fashion, celebrity gossip and also politics. It has currently 4.3 million Instagram followers and 100.000 new followers per week. Until April 2016 the Facebook site counted more than 4.4 million likes. The website breaks every rule: 2.5 million visitors per month and 10 to 11 million pageviews.

Angie Nwandu pictures The Shade Room as an social media company, that celebrates the online culture of a whole generation – especially of an Afro-American community (73% of The Shade Room’s readers). It hasn’t taken long till the press took notice of her work and engagement on social media: “Nwandu might be the first media mogul of the distributed content age, and she’s a perfect avatar for this particular media moment: a young woman of color who knew nothing about the media business when she launched, still figuring it all out as she goes along,” BuzzFeed’s Doree Shafrir wrote in a 2015 profile.

The Shade Room and its Roommates

The Shade Room is completely different from any other typical celebrity entertainment website:

Angie actually did a lot of “detective work“ on Instagram to figure out who was dating whom, who had broken up, who was in a fight and commented every step of (black) celebs on her Instagram account. The readers of The Shade Room take an active part in curating and distributing the daily content. These ‘Roommates’, as they are called, deliver free content from all over the world – 24 hours a day, 7 days a week. The Shade Room talks about what is happening a day before any other site had reported it.

What about the money?

That makes it easy to find ways of financing – through advertisement. Besides supervising the website, Angie Nwandu concentrates on selling advertisement on her social media accounts. The Shade Room publishes seven to eight ads per day. Relevant to know: The companies consciously select these types of channels because their readers are the biggest and most powerful group of consumers in the American industry with a very high buying power – 50% of The Shade Room’s readers having a household income of over $100.000 per year. “Brands are like eating that up, they are like ’we have to advertise on The Shade Room!“

The Shade Room is breaking the rules of social media

With growing influence, there also comes an increasing number of complaints – from celebrities who are upset about content that’s been made public and platform operators. The Shade Room’s Instagram account was briefly shut down last year after an actress reported the account to Instagram. On a Monday in April 2016, Facebook took down the Facebook page with more than 4.4 million likes. Generally, there are number of reasons that Facebook might take down a page, even with an active and huge community. One of those reasons is if a publisher posts something that Facebook deems a “violation of intellectual property“ – posting content you don’t have the copyright for. Angie Nwandu contradicts those accusations:

[pullquote align=”full” cite=”” link=”” color=”” class=”” size=””]“I monitor the page frequently and nothing was posted that violated any rules to my knowledge […] We have been targeted on FB and have been receiving numerous reports over things that don’t violate the terms. The amount of reports have been excessive.“[/pullquote]

Many supporters of The Shade Room see another possible reason for blocking the account in its open and wide-coverage debate on police violence against blacks. This attempt to avoid political controversies could be one of the major drives for Nwandu’s new concept: The Shade Room is planning a mobile app. Obviously, there are far less rules and constraints in the production and distribution of content. Besides this, being where the users are seems to be the best choice for making profits.

Since April 20th the Shade Room is back on Facebook: