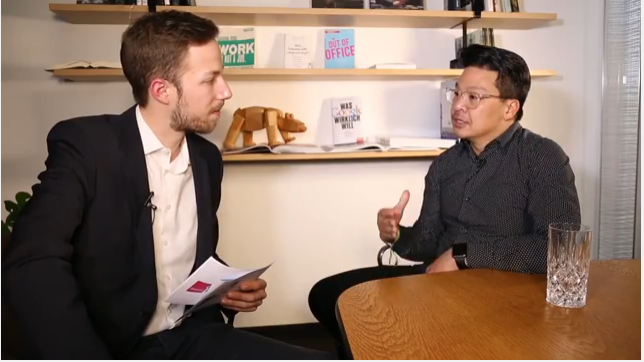 Jeremy Tai Abbett helps people to be creative. Maybe one can say that creativity is his religion. We wanted to know how Jeremy gets people out of their comfortzone and how he helps them to find inspiration. At 48forward he speaks about the way how to approach people in an rather unorthodox job.

Jeremy Tai Abbetts job title is quite unique. He is a Creative Evangelist and his former employer was no other than tech giant Google.

If you haven’t heard of this job position before, it is important to notice that this job has nothing to do with church. At least if you wouldn’t consider creativity as some kind of belief.

Jeremy, in his own way, preaches creativity and innovation. He acts as a mentor for companies and particularly startups. By doing that, he gives workshops and helps people to connect the dots between design and technology.

At 48forward, we had the chance to get to know Jeremy better and ask him a few questions about what his mission is.

To start, we first should be clear about what a Creative Evangelist is doing for a living. It is important to know what Jeremy’s idea of being Creative is. There are some things that matter the most and a first step is getting out of your comfort zone. To break a routine, Jeremy says connecting dots to something new is key. To make that happen, we should try new things on a regular basis. This could be a new haircut or listening to new music – whatever forces us to see something already existing in a new light.

Jeremy states that especially kids can learn and explore something new every day – which is a behavior adults should be trying to go back to.

Next, this new way must be applied, meaning something should be done in order to achieve actual results.

Jeremy brought up that companies such as Rocket Internet are doing a good job by doing what they do, even if their concept is to simply copy what others do, because they know how to apply.

As for companies, it should be a priority to create a culture where people actually have the chance to try out new things and not just following routines without asking if there could be another way doing things.

Innovate: apply the learnings and scale them

Jeremy thinks that university is one of the best places to be creative and find what you love, because students are less limited by routines. Simply try something you would never think you’d like doing.

Nevertheless, an employee who is doing the same job for 15 years is not hopelessly lost. It is important not be forcing anything on him, instead trying to get him to understand the new culture and apply it himself in his own way.

Personally, Jeremy asked himself what he is really passionate about at an early stage of his career. He wanted to find a way to make money based on what he loved doing. In his case, this was discovering new things and also sharing them with others. So he started creating a kind of structure around that and began working with companies and people, having them come up with their own ideas. Today, his role is mostly to act as the coach between people.

Conclusion: There are no limits for your creativity – just give it enough time and space.