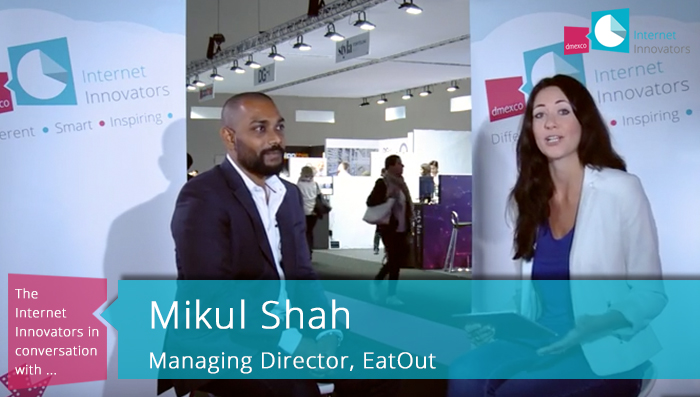 On Internetinnovators we talk about business models, digital life and markets. Especially about Germany, the US and the UK. Now, how about taking a glance at Africa? At the dmexco 2015 we had the chance to talk with Mikul Shah, founder of EatOut and expert for the african market.

EatOut is an an online restaurant guide, booking system, a magazine and one of South Africa’s most loved brands. EatOut was founded in 2010 by Mikul Shah who, after degreeing and living in London for over a decade, returned to his birthplace Kenya. Surprised about the fact that his friends who lived in Nairobi all their lives and barely knew some of the famous restaurants in town, Mikul Shah decided to build up a company giving restaurant tips for tourists, but especially for the local population. It started as a simple blog with one employee, but now EatOut is a growing company with a team of 13 people, profiting through the technology experience of Mikul Shaha and thus frequently awarded (e.g. winner of Kenya Tourism Award for Best Digital Media).

Over a long period the advertising industry in Africa was dominated by classic above the line marketing, tells Mikul Shah. Billboards at every corner of the street and classic advertisement in every magazine. „That’s how marketing functions there,“ he explains further. But the advertising industry rapidly has changed in the last years, since an undersea cable has just been connected to Kenya in 2010. The internet increased enormously while the cost for data keeping dramatically dropped. In the same time Facebook became a serious global player and different enterprises, like Google, set up a branch in Nairobi. All those things jointly meant that „digital marketing for small brands became the only option because print and billboards became too expensive.“ What Mikul Shan sees now is a steady growth of the social and digital advertising industry. The market is changing; from a traditional above the line marketing to a 360° approach.

Kenya seems to lead the race in the advertising industry with the rest of the East African countries. A few assumptions can be made to explain this phenomenon:

Cell phones consequently changed the way of communication in Africa within a few years. The African continent directly jumped into the digital and mobile era, skipping the landline stage of development. In 2002, roughly one-in-ten owned a mobile device in Tanzania, Uganda, Kenya and Ghana. Today, cell phones are mostly as common in Africa as they are in the US. Cell phones have different uses for their owners, but sending text messages and taking pictures or recording videos are the most popular activities. It is important to note that 61% of mobile owners in Kenya use their device to transfer money. Mikul Shah stresses out the country Kenya as a pioneer of mobile first uses. 60% of e-commerce is currently processed via mobile technology; in urban areas the share lies already around 90%.

What about the challenges in Kenya and the rest of the African continent? Mikul Shahn points out that many businesses are not familiar with the new technology; so it is all about teaching and practising and in how far companies integrate best-practices into their own business life. „It has to be a mix of all sorts of different platforms and channels rather than just the traditional form“.

The biggest challenge for Africa: Infrastructure, connectivity and technical reliability.

Taking into account the potentials, Africa profits from a steadily growing (advertising) market: „In terms of smartphone penetration you are looking at 10% or 20% of the African continent.“ In contrast to the rest of the world with a penetration of 80% or higher.

Hence, the potential of innovation and growth is enormous. Africa offers a high potential for local companies, trying to communicate to the rest of the world as well as huge brands that want to access the African market (from outside). In terms of reach that is the biggest difference to other countries, like Europe or the US.